A unique format that people in some communities on the internet engage with, callout posts are pitched as a way to either maintain "accountability", or "keep people safe" by spreading awareness, usually of an individual's behavior.

Callout posts take the form of social media posts and threads, pastebins, and google documents. They aim to be a collection of evidence of a person's wrong behavior, and are spread to that person's followers, aquaintances, and members of their communities. Their intention is as an argumentative essay; it tries to persuade the reader that the target of the post is dangerous in some way, and should be avoided.

There are several reasons that people make callout posts about other people. Reasons for callouts include:

On this page, I refer to the person who wrote the callout as the writer/author. The images are all screenshots of callout posts, the rest of the text is written by me.

An otherwise important document can sometimes have a really dumb or irrelevant accusation thrown in. This compilation is not meant to be representative of all documents for revealing abuse. When those otherwise good documents have accusations like this, it throws the motivation for making the thing into question. It's also funny, so I'm putting them here.

Images can be inverted using CSS to be easier on the eyes. Click the invert button on the lower left to invert.

Uwah?! I Got Hypnotised Into Going To A Payment Site, Typing In A Findom's Email, Entering In The Amount, And Clicking Send?! 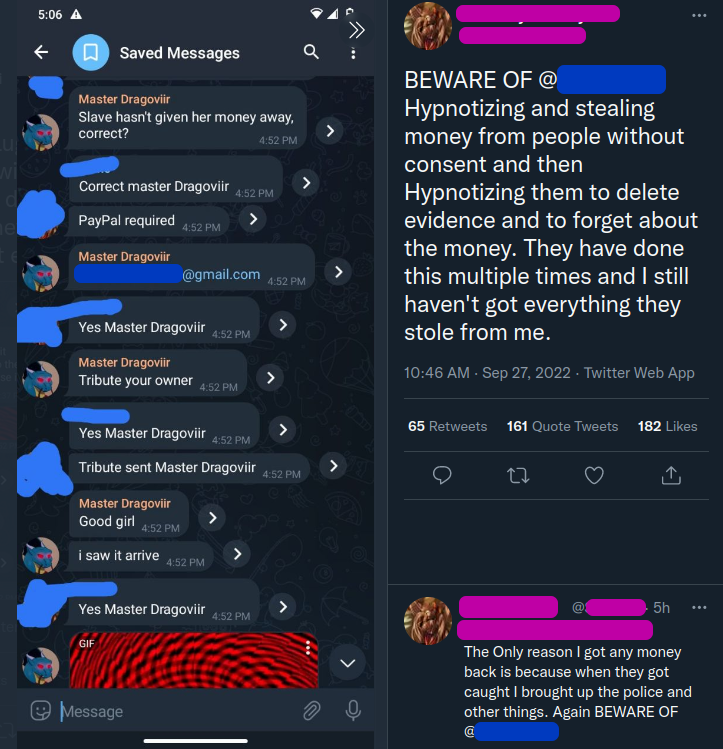 This person was hypnotised through an online text-based instant chat service into asking their hypnotist for their payment information, and then sent them money. They later changed their mind about wanting to do that, and decided to warn people of the hypnotist on Twitter.

The hypnotist sent the money back, after which this person wrote their thread. 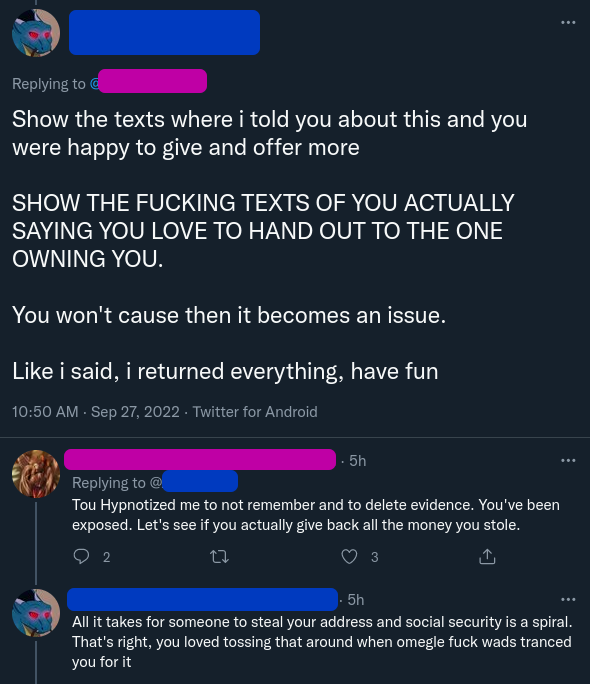 The hypnotist responds to the thread.

A vast majority of the responses to this are people trying to hypnotise this person themselves, replying with spiral animations and a request for upwards of $10,000. I will not risk showing these posts here, so any viewers of my website aren't inadvertantly hypno-abused into logging into Twitter, finding the posters, and sending money to them.

16 Year Old Not Only Buys Body Pillow, Also DATES 14 Year Old. Also They Built A Bomb Or Whatever 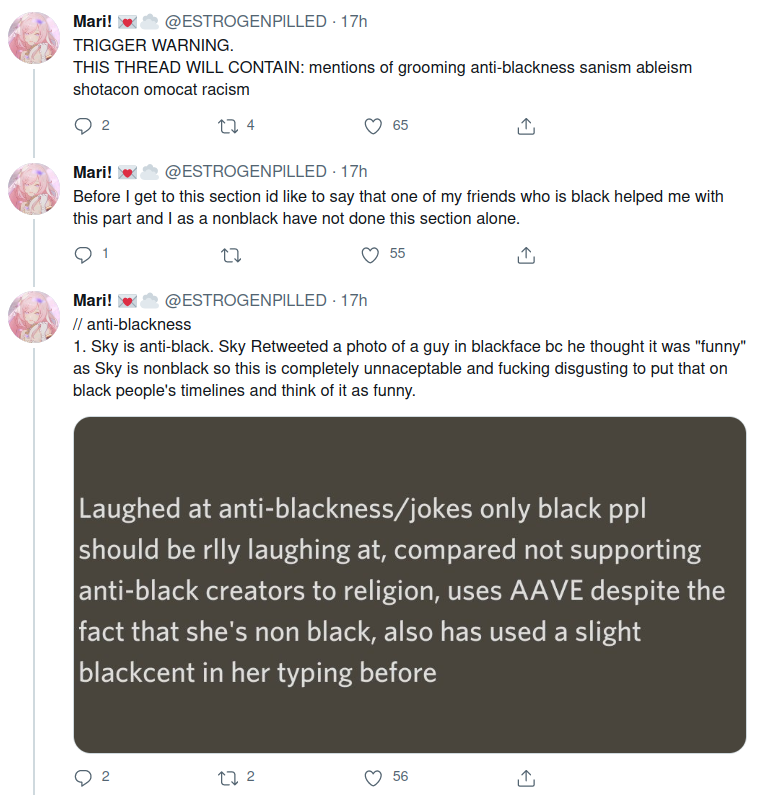 This thread is about an anti-black racist, groomer, sanist, ableist, shotacon and omocat supporting 16 year old. Here's the evidence of their racism, an unsourced unattributed screenshot of something someone said about it. Their racism amounts to a retweet and "using a blackcent in her typing", both of which are intensely disturbing activities that warrant warning the public. This isn't the notable part of the thread, though.

5 tweets down the thread, the author includes this, almost as an after-thought. Oh, they're a fan of omocat!?! And they constructed and detonated a bomb and are on the FBI watchlist I guess. The writer then goes back to talking about the body pillow immediately after this, as if they didn't just drone strike their thread. 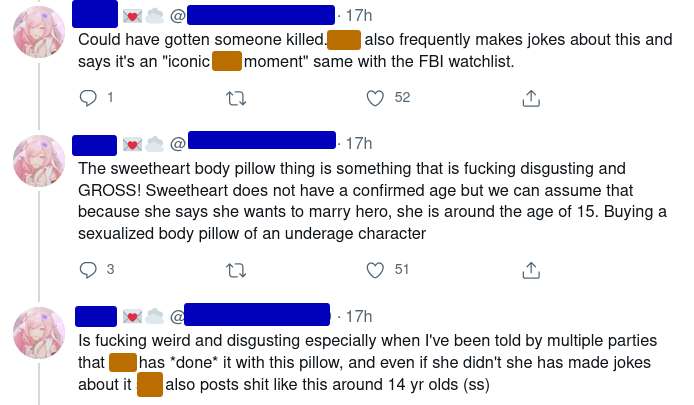 The body pillow is 15!! Ahhhh what the fuck!!! No one is reading anything past this point. You just see the hole in the ceiling and "FBI Watchlist" and you scroll through the thread as if you were flashbanged.

SRB2 Kart is a Mario Kart inspired total overhaul mod to Sonic Robo Blast 2, a Sonic fan-game which is itself a Doom mod, somehow. It's actually really fucking good, and if you like Mario Kart but wish it was faster and more chaotic, you should really try it. There is a big modding community for SRB2Kart, and there are a ton of custom racetracks and characters people have made.

It's not entirely clear who is doing what in this situation, but it seems like this entire paragraph is about the target's friend. This section is under a heading titled "Pedophilia / Incest". The writer does not clarify if they believe the target was the cause of this behavior, perhaps grooming this person into thinking Klonoa is hot, or perhaps this is supposed to be guilt-by-association.

"[I] remember it today and cite it as one of the main examples of this behavior." What behavior? Squishing Klonoa while talking about how hot he is, this happens all the time. It's terrible. It has to be stopped.

For one thing. Why would this friend talk about how much they love Klonoa, when they are literally currently at the present moment SQUISHING him endlessly. By a obstacle no less. Your honor. Can you trust someone like this? Why would they want to crush the one they love most? I believe the defendant is guilty of lying, and at least of emotional and physical abuse of the victim, Klonoa.

Even before we look at the evil acts talked about here today, we can't forget this fact: From the very beginning, they took away Klonoa's agency and free will. They were literally controlling everything he does, like a master manipulator. Klonoa had NO choice in this situation, or anything leading up to it.

He FORCED Klonoa to drive his little car underneath an obstacle. Imagine his fear. When he was slowing down underneath that obstacle, if Klonoa was still in there somewhere, he must have looked up at that crusher and thought, Please God, let this be enough to get me out of here. Please, please let this be the end. I have no idea how I got to this race, I don't know why I'm here, I'm in pain all over from those spike balls, please let this be it. Anything but this.

But that wasn't the end for Klonoa. The rules of this twisted individual's "game" meant that Klonoa would not be privileged enough to feel the release of death. He never would. He could be crushed and squished by the obstacle for as long as his controller wanted. And he would just spin around in a circle and say "wah-ouch" and be ready to be squished again.

Not only is Klonoa being crushed over and over, he's also being "love-bombed" by this person who forced him into this endless cycle of needless pain. "Gushing" about how much they "love" him. Furries and monsterfuckers of the jury I ask you WHAT kind of critter with a sound mind would do something like that.

- At First I Thought He Did A Bestiality IRL...It Turned Out To Be Much...Much Worse

When this writer discovered there was "zoophilia" in the accused'd "Fave" column, they had concerns. Was their mutual aquaintance admitting to fucking d*gs in real life? It was troubling, so they confronted them about it.

After the first attempt at contact, they were ignored, as the author points out. "Hey, I just saw in your list of kinks that you like zoophilia. Is that true? I have a random document I've been writing, and I think your story could make a good paragraph."

Eventually, they responded "under promise of secrecy", which the author points out to make readers aware to not tell them any secrets, as they could end up on a google document posted publically to their entire extended friend network.

The wording that the author uses to describe the secret is a surprisingly soft follow-up to something like "Starting with the zoophilia: they had zoophilia as their fave". Oh, actually, they just "roleplay nsfw scenarios with non-sentient creatures". Okay. Without the usual accusatory language it makes it seem like this doesn't fucking matter at all actually. If one wanted to make this into a proper defamatory statement, you could instead say, "They told me they fantasize about doing fucked up shit to animals with other zoophiles, and even share pictures of it with them." See how much worse you can make people you dislike look?

Document accusing someone of abuse has random aside about the accused person storing deceased pets in the freezer, being unable to bury them.

The accused corrects and responds to this weird statement:

This post is about a somewhat large event happening on Tumblr currently.

"aot" stands for Attack On Titan; a manga and anime series

Very heavy allegations of being not only a nazi, but a pedophile and TERF as well. 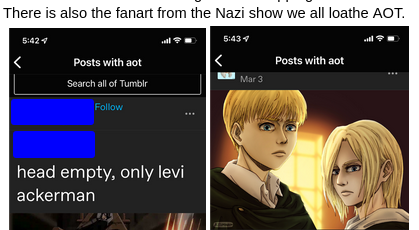 This is the entirety of the section regarding the accused's nazism. Here is the proof of them being a TERF:

Pretty damning stuff. It only took a cursory Tumblr search. 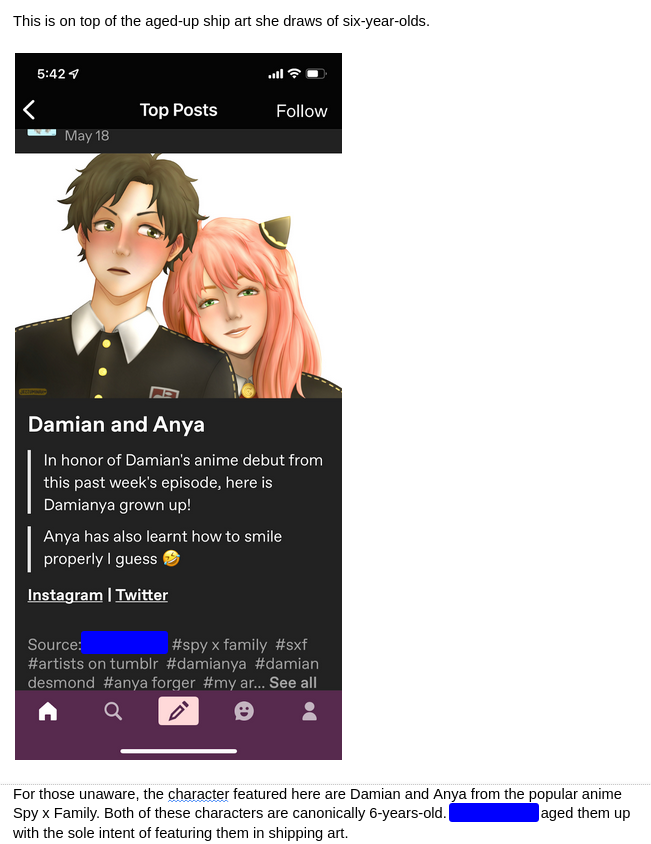 Entire section on the accused's rampant and terrifying pedophilia. The cruelty of the accused to erase years from these young people's lives is despicable, and they act like they did nothing wrong. They aged up these characters with little to no remorse. I can't imagine what kind of twisted psychology a person must have to justify drawing something like this. The art in this image is not cropped.

The author recieved some criticism over the fairly intense allegations with irrelevent evidence, and updated the post. Now, instead of outright claiming they are a pedophile nazi TERF, the accused only..."engages in antisemitic, transphobic, and predatory behavior". The rest of the document gets a cleanup to be a little less brash with its language. 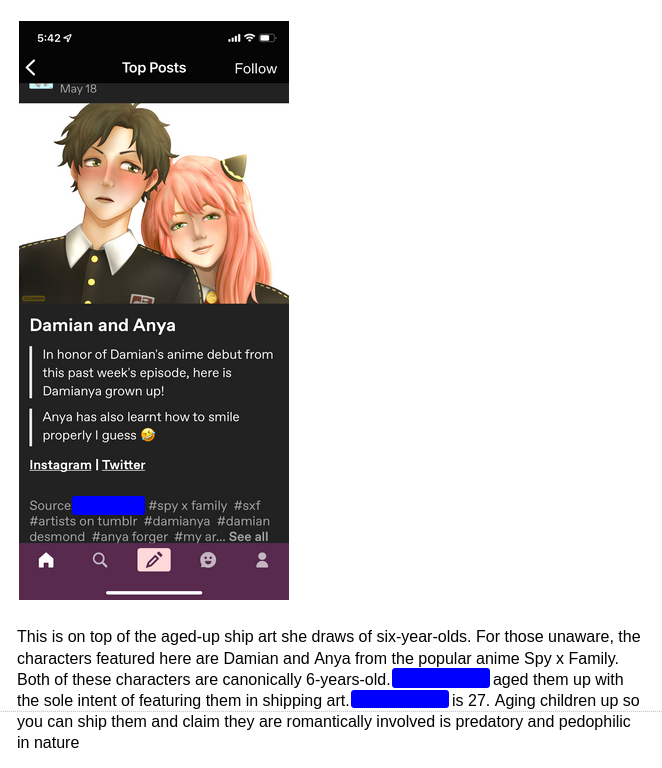 Thankfully, the evidence of this deplorable act is still documented. Knowing the childhoods were stripped from these characters so effortlessly and for such an insignificant purpose makes me feel sick to my stomach. I'm terrified of what else this sick fuck is capable of. How did they do it? Did the accused discover time travel? They are making leaps and bounds in scientific advancement everyday. Imagine if they used this power for good. If they can channel the flow of time in a localized area, we could harness it as an energy source, or use it to conduct long-term studies very quickly. The writer of this callout post is 22 years old.

Random Out Of Context Screenshots

what great callout doesn't have those LOL!!!! 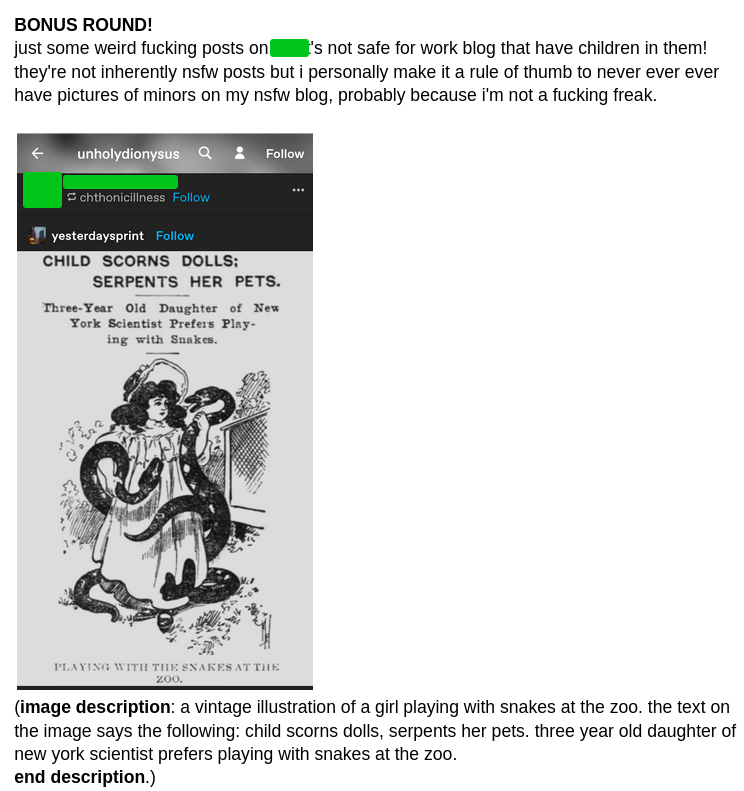 Yeah, sure, I told this random stranger to kill himself based on 3rd party information, but look what he said in response!! *makes a callout post* 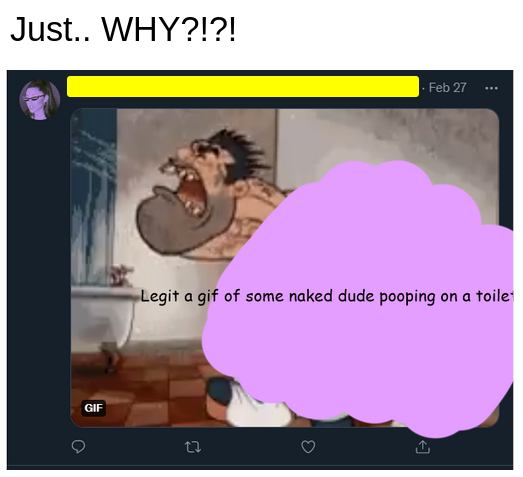 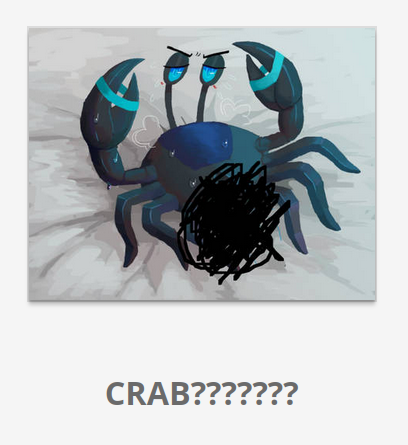 This image was used as evidence for a zoophilia accusation. Thank god someone finally stood up for the fetishized bugs of the world 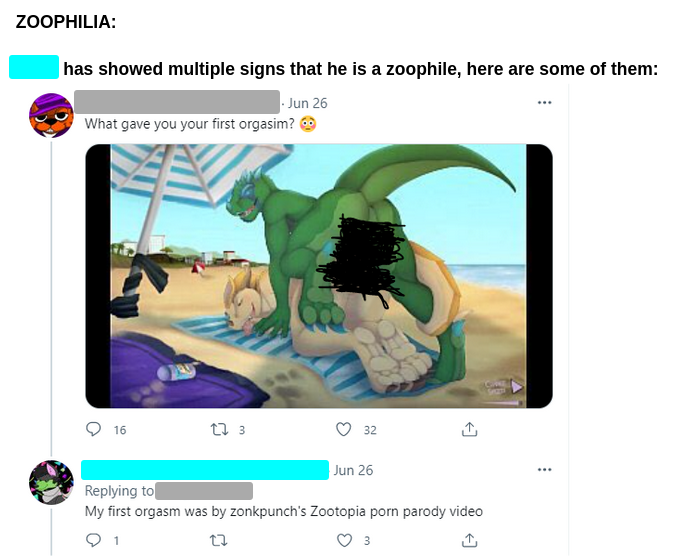 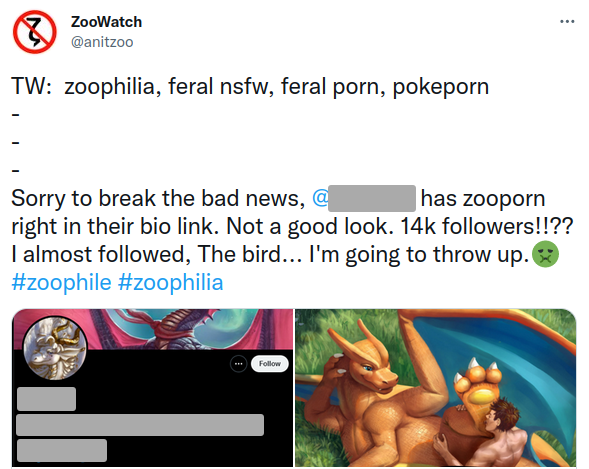 "Stay safe out there guys"