I'll dump my notes for working around the dumb shit that SL makes me go through to make avatars here. They won't be super organized for now. I don't use avastar and I am much more familiar with Blender than SL, so keep my perspective in mind while referencing this

The default preset for exporting .dae files to SL/OpenSim is STILL not correct (as of 2.93). The rest of the Sl+Open Sim Rigged/Static presets are all OK except for this needed change:

When you make an avatar, all the bones need to be named correctly, and in the right order for the bone heirarchy; you can't just rearrange the skeleton in whatever way you want. The mHead bone needs to be attached to the mNeck bone, you can't attach mHead to any other bone. You don't *need* to include every bone that SL supports, like the trillions of face bones, or the collision bones (the bones with all-caps names). At the very least, to make a character that you can upload and have it Just Work and able to walk around and use animations, you need this set of bones: 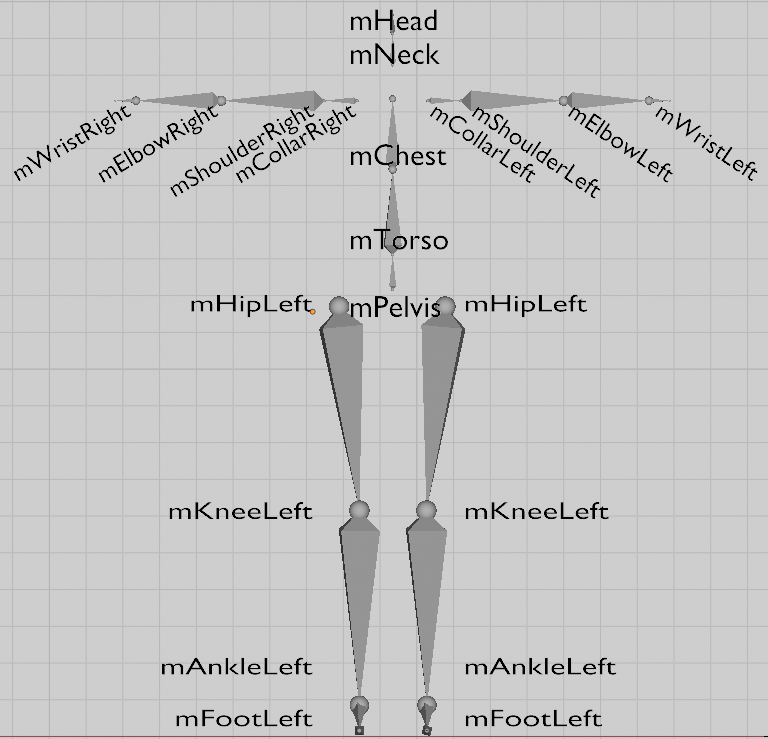 mPelvis is the root bone.

A good way to make an avatar is to download this Bento skeleton .blend file. The skeleton's base bones in the above image can be found in this armature layer (the blue selected one:)

There are no tutorials about making rigged furry parts wtf

When making a rigged attachment, if there are any bones in the attachment's skeleton that aren't being used and are offset away from the default SL skeleton's bone positions, then they will be saved in the rigged attachment as position overrides for those bones. Example: If you are making a rigged tail, but include the pelvis bone in the tail's armature, if the pelvis bone is moved, then whoever wears the tail will have their pelvis bones offset. I was making a set of rigged furry ears, and after I uploaded it, I noticed in the visible-bones debug view that when I wore them, they would shift every bento face bone. It was because I moved the mFaceRoot bone on accident, and included it in the armature.

I thought that a full skeleton was necessary because I assumed Second Life wouldn't be able to parse an incomplete skeleton that doesn't include everything up to the root pelvis bone. It actually does, and it will treat the origin point of the armature as the next highest parent bone. (If you just have an mTail1 bone in an armature, SL upload will treat the origin as mPelvis)

If you want your tail attachment to use the wearer's avatar-body's tail position, then this is what you have to do:

If you want your attachment to have a custom location, like having ears on the top of the head instead of the side, you can just position those bones relative to the origin without worrying about maintaining the offset. For ears, the root will be the mFaceRoot. If you're making generic ears not specially made for a head you can just eyeball it and make your mesh have some leeway for slightly larger/smaller heads

This stuff took me frustratingly long to figure out because info on SL dev is scattered and/or not beginner friendly. Here's my random tips for people who want to make avatars.